Love the look and feel of your smartphone? Thank Dieter Rams. His quietly innovative versions of household products, stripped of any extraneous features, continue to influence industrial design today. Throughout a celebrated career at the German manufacturer Braun and the furniture company Vitsœ, Rams created elegant and intuitive forms that remain timeless monuments to understatement and ease of use.

This exhibition surveys Rams’s prolific body of work—from radios, clocks, and cameras to kitchen appliances and furniture—and examines the longevity and impact of his design philosophies. In November 2018, he received our Collab Design Excellence Award, given to a design professional or manufacturer whose contribution to the field is inspirational.

Get a sneak peek at works in the exhibition.

Dieter Rams is one of the world’s most influential product designers. Born in Wiesbaden, Germany, in 1932, he initially trained as an architect and interior designer. In 1955 he began working for the German manufacturer Braun as an architect. By 1961 he was its chief design officer, overseeing not only product design but every element of the company’s design identity.

For forty years, Rams not only defined the modern appearance of Braun’s products, but developed a broader philosophy for rational, responsible, and enduring design. His Ten Principles of Good Design are a precursor to the minimalist aesthetic of modern tech companies, but his values of creating long-lasting and environmentally friendly products are rare. His philosophy extended to his later work for the furniture company Vitsœ, where he designed modular seating and shelving that remain in production today. 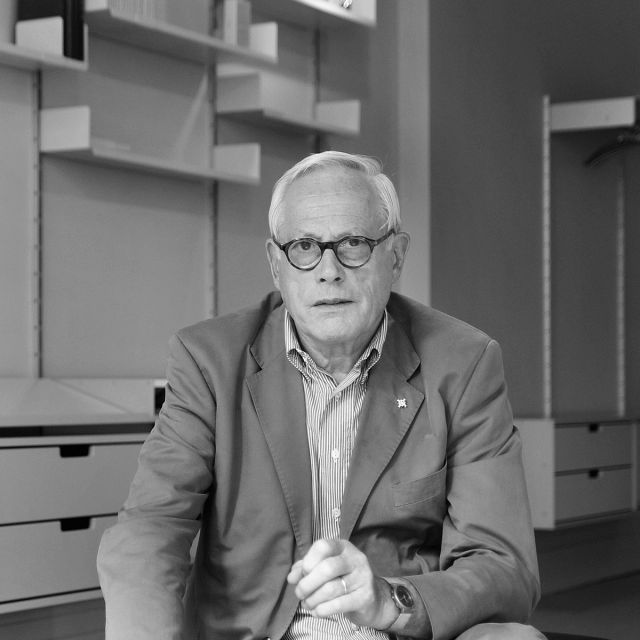 This exhibition is made possible by The Lisa S. Roberts and David W. Seltzer Endowment Fund in Support of the Collab Design Excellence Award Exhibition. Additional support is provided by Collab, the Institut für Auslandsbeziehungen, and other generous donors. In-kind support has been provided by Vitsœ.